Well I jumped into my first gaming tournament since…well….maybe nine years prior at Adepticon.
I have to say….I did not miss the tournament scene. 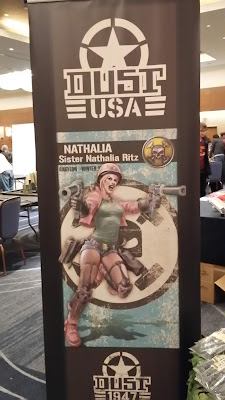 Alright so the Paradise Lost Narrative and fun/friendly Dust 1947 Tournament Saturday at Adepticon will more than likely be the last of that tournament which I’ll participate.
Why?

Well it was anything but “friendly.” There were several guys with list crushing armies and I had the pleasure of playing one of them in my second game.

My first game I had to play a kid, maybe 12 years old. Ugh. I don’t hate kids, but I damn sure didn’t want to play in a tournament against one. Why? It is a lose/lose scenario. If I beat the kid…then hooray I beat a kid. If I lost…then I’m a goon for losing to a kid. It was lose/lose and karma would remind me of that in my second game.
As the game played out I systematically dismantled his army, and I felt horrible doing it. I wasn’t trying to table this kid. I was playing the scenario and he wasn’t. I even reminded him a couple times that he needed to grab the objectives. I tried to help him, yet he was trying to wipe my army and doing a poor job of it. I outnumbered him roughly 3-1. He came at my zombies hard and was torn apart by numbers. Soon, I had achieved my objectives and had nothing left to do but finish his last three units and deny him his objectives. I left this child with only two smoking wrecked vehicles on the board. Hooray for me! I wiped the floor with a kid (insert thumbs down with a wet fart noise).

Onto game two and three where Karma proves to be a bitch goddess...giving with one hand and taking with the other.


Game two and I facing the Soviet Steel Guard. These are nigh unkillable without weight of number troops in little walking mech suits. The army I was facing ha a single tank, and four units of anti-infantry Steel Guard with these rocket weapons that negated the ability to make any kind of defensive save. They also have descent range so once up the board they can hit everywhere. Plus they can stand still and get a sweet bonus to hit. Then there was the giant tank too that had a tesla weapon to just constantly stun any unit hit. Thus keeping them from doing anything effective the following turn. The army leader was also one of these guys and had three weapons to shoot each round too. This is what I call an example of a tournament and not “friendly” list.
Over the next six rounds he proceeds to nuke my army with rockets I can’t defend against. I am losing 4 units of zombies a turn. Get to grips and he makes all but two of his crazy fell no pain…I mean damage resistance saves. The big tank stuns my anti-tank stuff and then heavy machine guns my other anti-tank troops to oblivion. I have the numbers, but by the time I get zombies tied up with his four troop units they are so picked apart they pose no real threat. Even better is the lights out dice this guy was rolling. Sooooo many basically 5+ saves were made or failed...and then made on the reroll these guys get for damage resilience. I was able to nab five of the possible nine objective crates before he destroyed every model I had. Karma looks to have reared her head and rewarded me with a loss fitting my game one win.

It was comical how this game played. I didn’t get upset I just laughed. I had to laugh, because if I didn’t I would have boxed my army, said frak it and left after the 3rd turn of the game. I have never had less fun playing a game. There is a challenging game and then there was this nonsense.

Wait! Tack on that the game board was split by a train that moved and kept you from crossing the board. Well you could cross behind it or risk getting hit by crossing in front of it. Even better, is that this train didn’t block line of sight for shooting. So I had to run my zombies around this train all the while getting hit by rockets. Sure the scenario objectives were on this train and had to be removed from it.

Anyway I killed two of this guy’s models. Two! He killed all of mine. I did nab five objectives before I was wiped out. My opponent simply walked up to the moving train and grabbed 4 crates before the time for the game expired. Sure I won on scenario, but boy did I lose when it came to victory points ( points of full units killed in this game was 100 to 0). It was just disgusting, but fitting punishment for beating a kid right?
Game three and I am facing a different flavor of the Steel Guard. Well great! More of the same nonsense I just played! Sure this guy only had one unit of super kill everything rockets, but they were safely in a helicopter where I couldn’t touch them. Then he had snipers and three other flavors of these same Steel Guard A-Holes. I just shook my head as he began doing the same nonsense as last game. He had the same leader that could fire like three weapons, tesla crap to ruin my anti-aircraft units to keep his helicopter safe so the super rockets could rain down on me. Toss in a pair of snipers tossing out unsavable damage each turn too. It was just as frustrating to face this different list of the same Steel Guard army.
This game came down to scenario points only. We both had to secure a spy and get his away safely. I did that, but not before losing over half my army in the process. I did destroy a single unit of these Steel Guard  guys, but it was a minor pyrrhic victory.  This game was just as terrible as he grabbed his spy on turn two and then turtled up around my spy’s location. Yeah these spies were in random locations and our s were basically on in the same column on the board. It took three turns to get enough zombies through terrain and into his lines so I could procure my objective. All the while he just hover his chopper pasting a unit a turn or I was busy running into a buzzsaw of gunfire. It was ugly. I wasn’t able to down that damn chopper with the anti-air guns I had thanks to bad rolls and tesla stunning weapons. My ground forces did great at swarming his troops, but not getting enough damage through the Steel Guard armor and damage resistance saves. It wasn’t as awful as the previous game, but it was annoying to play against this army again. Thankfully I tied with this guy. It denied him a second victory so there was that.

I was really looking forward to getting some “super chill” games of Dust in and what I got was a face kicking, an annoying tie and a face stomping of a child. Yeah. Three games and not really any fun was had. Lesson re-learned universe. Ian needs to stay away from tournament games no matter what descriptors are used.