WS, what is the point?

What is it? Let’s really look at what this rule says...
WEAPON SKILL (WS)
This characteristic defines how skilled and vicious a
warrior is with his weapons in close combat. The higher
the score, the more likely the warrior will land blows on
a close combat opponent. An average human soldier
has WS3, while a genetically-enhanced Space Marine
will have WS4 or even WS5.
So, the higher the weapon skill the better right? Well not really. When you look at the to-hit roll table, we see that a 3+ is the best roll possible to hit. Why? A WS 5 Marine is no different than a WS 10 Bloodthirster. Doesn’t that sound strange? They both require a 3+ to hit most targets, or the most common targets (WS 3 and WS 4). Now I know there is a difference when it comes to being hit, but that is not the issue at hand. I’m talking to-hit rolls here.
Read more »
Posted by ian!!!! at 9:03 AM No comments:

"SHO'NUFF!"
Bless you  The Last Dragon (for movie awesomeness click here).  Well it isn't Sho'Nuff, but it is the master of my Malifaux crew, Ramos.
This is my 1st real Malifaux miniature. I did paint some Sorrows long ago for Chaos Lesser Demons (maybe I'll get pics up one day).
Read more »
Posted by ian!!!! at 9:49 AM No comments:

﻿Whenever I hear this Grey Knight's name this is where my mind goes. Thank you Heavy Metal! Some great stuff there.
﻿However, this is the actually guy, another of the big muckity muck Grey Knight HQ choices. 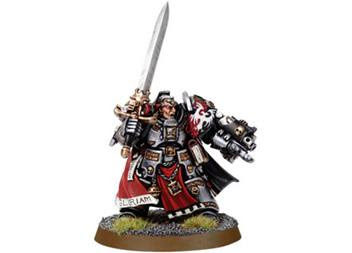 Brother Captain Arvan Stern is the longest serving member of the Grey Knights, like four decades or something. He has a bit of a stalker and it has kept him from climbing the Grey Knight ladder of success.
Read more »
Posted by ian!!!! at 9:32 AM No comments:

With my completion of Space Marine on normal and then easy difficulty, it is time to move on to my next game.

I love this series and can only hope that the 3rd installment is as awesome. The story might be a bit cliche, but the game play and violence is spectacular!

Here I hopping that part 3 will be as fun and will quench my thirst for animated blood and gore.

Take a few bits, a Mordor Troll and some chain and I'll get a second Khorne Demon Prince. He is my walker. I like wings, but I wanted more points to spend elsewhere. He can keep pace with the Bloodletters or  hopefully drop in off an icon.

After some bits digging, I found a banner for orks and thought it would make a suitable and weird head. Much better than the troll head I had as it looks chaos-ie and weird. A little cutting and a pin job and the head was set.

Who has two thumbs and kicks butt? This guy! (Garran Crowe points to himself)

Ah the first HQ character review for the Grey Knight codex. I figured I'd start here based on the last unit review I did.

﻿ ﻿ Garran Crowe is Castellan Champion of the Grey Knight's  Purifier order and the bearer of the Blade of Antwyr. This is a crazy demon sword that causes crazy demon stuff to happen when wielded. Well when wielded by lesser men than Crowe. Oh yeah it also cannot be destroyed. So it was given to Castellan Crowe since he is the purest of the pure and most incorruptible of the Purifiers. He now wields this weapon, but will not call upon its powers. He also has to deal with the sword's talking, visions and shenanigans and the fact everything and everyone is drawn to the sword. This is on top of being a Brother Champion and all the stuff that entails.

Brother Sarge Lydor and his squad

Brother Seargent lydor is the resident "tinkerer" in the Company. With the lack of a true Mechanicus training the Battle Company﻿, Brother Seargent Lydor and the few tech priest slaves and servitors are the repair crew.
This isn't a bad thing as it is his ingenuity that made the advancements to his armor and optics. It also let him retro-fit the Company's Rhino transports with faster engines. However, his talent keeps him off the front lines as  he is far to valuable to lose.
﻿﻿﻿﻿﻿
﻿﻿﻿﻿

However, there are times when every warrior is needed for the battle at hand. When needed Lydor always leads a small squad to battle. Now this squad is mostly comprised of brothers who have railed against authority, broken some of the smaller Company rules, or just need to learn humility. They for a static long ranged suppression squad. There is nothing worse than being a fully trained and able close combat specialist, that has been assigned a heavy weapon instead of a bolt pistol, chain sword and jump pack. ﻿
Read more »
Posted by ian!!!! at 11:50 PM No comments:

Spent the past Saturday nite in Noblesville Indiana for our second (and sadly last) Blink 182 concert this year. We left later to miss the My Chemical Romance. After we got there, in and to our seats, those jokers were all but done. Thank the gods as after they left so did a majority of the 14 year old girls (and boys) that seem to make up their fan base.

Blink played a very similar set list, however Tom Delong was nursing the flu bug. This was fine as we got more Mark Hoppus songs. I like,both, but the Tom songs are usually faster and have more swears! The second chance to hear unreleased album music is always good and we got the same three "new" songs. Hopefully the remaining album is just as good, and if not it will still be better than their last self titled album (or African Child as we refer to it).

Another great concert, fantastic weather and some stellar curly fries on the ride home after the show.

Pre-concert was also phenomenal as we passed a S.U.V. that was on the shoulder and on fire. As we were cruising down 465 toward the venue we see the entire front end of a white S.U.V. engulfed in flames. It was awesome. The dudes who were in it were about 50 yards back in hysterics as the vehicle burned. It made for a nice pre show warm up. Yeah I just said that. A vehicle aflame in real life is soooooo much cooler than in the movies! We were hoping it would see the explosion in our rearview, but no such luck.

Now we wait until November, when we get to see Judas Priest on their farewell tour.

I think I’ll call summer officially over. Well it is September and to me once Labor Day hits the summer is done.
Well the internet rumor mill was fooled or fooled everyone with dreams of planes this summer. There was nary a flyer in sight. Now I’m not sure how this was started but hopefully “they” won’t do it again. Speaking of rumors remember those plastic Imperial Guard Veterans we were getting?? Yeah nobody else does either.
Read more »
Posted by ian!!!! at 3:37 PM 2 comments:

The Space Marine video game is out and about. I grabbed a copy for myself yesterday and gave it a proper go. This is a quick review as I haven't beaten the game...yet. 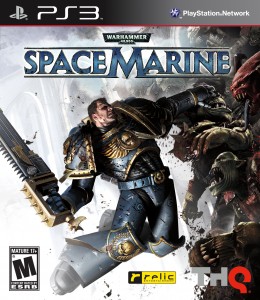 A quick back story….Ork invasion of a Forge World, Ultramarines called to help, you play as an Ultramarine Captain and his two buddies (Kodo and Podo as I refer) to them tag along…hilarity ensues! There now on to the rest.

Grey Knight review, The First Rule of Fight Club is....

Well actually this is the elite Purifier Squad review, however, after reading their exposition I kind of feel like they are the Fight Clubbers of the 40k universe.
They are dour, tacturn and secretive. Heck the Grand Master, is only non-Purifier allowed into their little club house. The Grand Master must be Tyler Durden. They have a secret sanctum, like a basement of a bar for fighting. They only recruit those who they think are worthy, nobody knows their secrets and they are very capable of dishing out some punishment. Sort of like the members of Fight Club, pre-Project  Mayhem of course.
﻿﻿

Have you seen this unit? Part 16

Antaro Chronus is the most gifted of all the Ultramarines when it comes to tanks. Chronus talents extend to almost any Astartes tank, while most dedicate to be the master of a single vehicle. Oddly Chronus is answerable only to Marneus Calgar; this is due to him being the Spear of Macragge. This was an honor won through his many battlefield victories and such. He doesn’t really have to follow any orders but the Lord of Macragge’s. His title is pre-Hersey and makes him the leader of Ultramarine armored assaults, and helps him ignore the chain of command. That is bit weird since the Ultramarines are so strict and doctrinal.